Just Cause 4 – Danger Rising (2019) – I was the Lead Designer and Product Owner for Just Cause 4’s third Downloadable Content (DLC) called “Danger Rising.” I designed and implemented the new hoverboard traversal mechanic, new enemy types that use the franchise’s signature grappling hook, and all the new weapons. I also helped to guide and direct the rest of the DLC content.

Just Cause 4 (2018) – I worked as a Senior Game Designer on Just Cause 4, with my focus being on all things Combat and AI. I also created the procedural “Random Encounter” system and scripted all of the encounters it could spawn. I made a few of the more notable easter eggs in it as well.  Get more info on the game here.

Just Cause 3 (2015) – From when I joined Avalanche Studios in 2013 and up until its release I worked as a Game Designer on Just Cause 3. My primary role was as an A.I. and Encounter Designer. You can get more info on the game here.

Color Zen (2013) – This is a puzzle game I designed at Large Animal Games that is now available for Nintendo Switch, Wii U, Nintendo 3DS, iOS and Android. It was featured in the iOS App Store’s New and Noteworthy section, and has sold over 1 million copies across iOS and Android. It was even reviewed in the New York Times. It was also showcased in the Digital Selects section of Indiecade 2013. You can get it on iOS here, Android here, and Nintendo eShop here. You can see a Game Developer’s Conference talk I gave on the game’s development and post-launch work here.

Pulse of the Samurai (2013) – This is a simple fighting game focused on spacing, reading an opponent, and deliberateness. I created the prototype during the 2013 Global Game Jam event at the NYU Game Center along with artist Shiho Pate. At the game jam it was given the Juror’s Prize for Best Overall game and won 2nd place in the Audience Choice category as well. It was also showcased in the eSports section of Indiecade 2013. You can play that Indiecade 2013 build on itch.io here.  You can learn more here. Coral (2012) – Coral is a flash game centered around musically balancing a set of Ensō circles at various heights. It began as a 48 hour jam game at the Babycastles X Parson’s jam, where it took home the Judge’s 1st Prize, and I continued to work on it for several months in my free time afterwards. You can play it on Kongregate here or you can play it on itch.io here.

Chip (2011) – Chip is a 2D action-puzzle-platformer made using Flixel. It’s a game of learning to manipulate and out-maneuver A.I. robots with a backdrop of a mysterious story about an estranged father and son. Play the full game now on Kongregate!

The Escort Quest (2011) – This is a “big” game originally designed by myself, Grant Reid, Eszter Ozsvald, and Andrew Gaffney, meant to be played in crowded outdoor areas. Development was continued by Grant Reid and I after its inception at the NYU. The game was an official selection of Indiecade’s 2011 Big Games program and Come Out and Play: San Francisco 2011. Players pair off in teams of two where one, “The Actor,” is blindfolded and tethered to their partner, “The Director.” The Director may not move of their own will, but rather must instruct the Actor around the area in order to collect collect and cash out point objects.  Check out this video.

Unreleased Prototypes – Of course over the years there have been plenty of unreleased prototypes. Some may still be worked on or tinkered with going forwards, others maybe not so much. Either way you can learn more about some of the concepts and prototypes here. 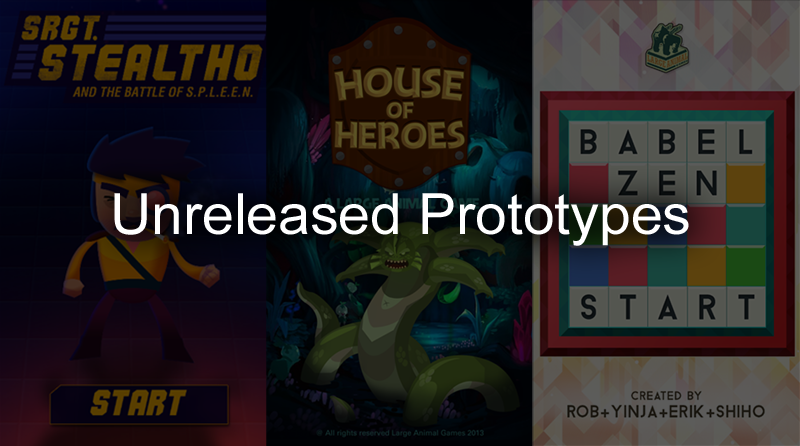